AP English: Improving Our Rhetorical Analysis One Quickwrite at a Time

I’ve mentioned that I am working on finding a way to be more efficient in my writing workshop. I want to expose students to beautifully written language that we can study together, and maybe learn a little grammar, but I also want to use these pieces of text for quick writes. I know that the content (or at least my questioning) has to be compelling enough that students will have something that makes their fingers itch to pick up their pens.

When I read I find myself dog-earing pages and book-marking passages that have been crafted with many rhetorical devices and/or literary elements. By helping students recognize how these strategies, used deliberately by the authors, create meaning, my students’ rhetorical analysis timed writings are scoring higher than they have at this point of the semester in years past.

I love it when my ideas work.

This is the passage we will read and respond to this week:

From An Invisible Thread by Laura Schroff and Alex Tresniowski p4

And so, when Maurice spoke to me, I just kept going. Another thing to remember is that this was New 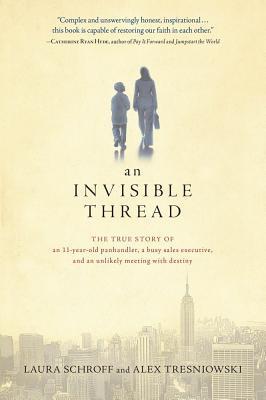 York in the 1980s, a time when vagrants and panhandlers were as common a sight in the city as kids on bikes or moms with strollers. The nation was enjoying an economic boom, and on Wall Street new millionaires were minted every day. But the flip side was a widening gap between the rich and the poor, and nowhere was this more evident than on the streets of New York City. Whatever wealth was supposed to trickle down to the middle class did not come close to reaching the city’s poorest, most desperate people, and for many of them the only recourse was living on the streets. After a while you got used to the sight of them–hard, gaunt men and sad, haunted women, wearing rags, camped on corners, sleeping on grates, asking for change. It is tough to imagine anyone could see them and not feel deeply moved by their plight. Yet they were just so prevalent that most people made an almost subconscious decision to simply look the other way–to, basically, ignore them. The problem seemed so vast, so endemic, that stopping to help a single panhandler could feel all but pointless. And so we swept past them every day, great waves of us going on with our lives and accepting that there was nothing we could really do to help.

Write about a time when you encountered a homeless person or a beggar. How did you feel? What did you do?

I am still working on the questions. Sometimes I think it’s best to say, “Just respond.” Other times I think students need more direction.

What do you think?

2 thoughts on “AP English: Improving Our Rhetorical Analysis One Quickwrite at a Time”