Something’s Coming: Inviting Student Writers Into the World of West Side Story 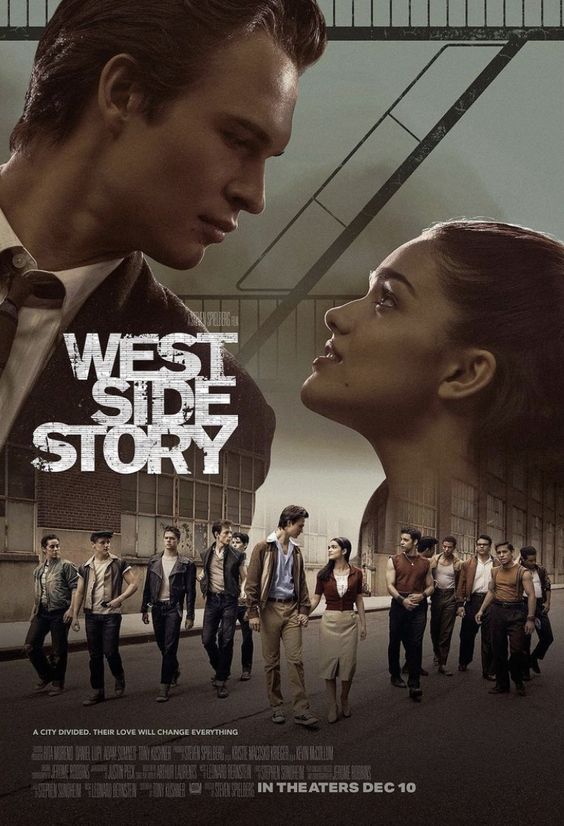 Like director Steven Spielberg, I’ve loved West Side Story all my life. Impatiently, I waited for his new film  based on the 1957 Broadway musical with a screenplay written by the legendary Tony Kushner to come to theaters.

Spielberg’s first venture into directing a musical does not disappoint.

Perhaps more relevant today than it was upon its initial release sixty years ago, West Side Story reminds us of how deep the divisions can be between unlike minded people, and that love can bridge any divide.  Leonard Bernstein’s score was and still is a masterpiece, and Spielberg was very intentional about casting all Latinx actors and actresses to play the Sharks. Gone is the dark makeup used on white actors in the 1961 film to make them appear Puerto Rican. Additionally, the new film incorporates Spanish dialogue without subtitles, in an effort to illustrate that English is not superior to other languages.

The new West Side Story is an incredible visual text for writing workshop teachers, whether the goal is writing film analysis, or using the movie as an entry point for Romeo & Juliet.

Recently, I invited my workshop students to view the film with me in class, with the following goals in mind:

Getting Started & Keeping a Journal

As our entrance for West Side Story, I used this anticipation guide (though I call it an opinionnaire) to introduce students to thematic elements. Following our conversation in response to the opinionnaire, I shared these Google slides, inviting students to think further about the film’s origins and why it matters for us to study it today. Your students may not require that much visual “front loading,” but I have several students with unique learning needs, and having the visual texts definitely provided important background information and aided their comprehension going into the film viewing. When I revisit this study with future classes, I plan to add slides introducing specific characters for clarity.

So when did we start writing? Immediately! I gave each student one of these journals inviting them to think about different story elements daily, from 3D character traits (thank you to Susan Barber and Carlos Escobar for their brilliant ideas about looking at characters through varied lenses), to considering how music moves the narrative along, and finally to writing a thematic statement for the character that each student writer chose to “follow” throughout the film. I invited students to follow Tony, Maria, Riff, Bernardo or Anita, but you could also encourage students to follow secondary characters as there are many significant supporting players in West Side Story such as Chino and Valentina.

I loved the ongoing discussions we had about our writing, and the depth of students’ observations. Though some of them were initially skeptical about watching a musical, even the most reluctant eventually fell under the enchanting spell of the Bernstein score.

Since we dedicated a significant portion of class time to viewing the film and it’s an invaluable doorway into Romeo and Juliet , and to reflecting on our own biases and what it means to love fiercely, I’ve offered my students two different ways to respond. The first, which we did last week, was to post questions for a large group discussion. Each student was invited to post questions connected to the following categories:

Students are familiar with writing a variety of question types since we’ve done Socratic seminars throughout the year, so writing their questions was in that sense, a review.

In addition to participating in the discussion through writing and speaking, students will be composing individual responses in which they take our large group conversation a step further by responding to a question that remains unanswered for them. Finally, students will share some concluding thoughts about their thematic thinking, and embracing characters as three dimensional beings (physical, emotional, and psychological).

I’m excited to see how this immersion in an iconic musical will enrich our study of parallel text Romeo and Juliet.

What are your favorite ways to use visual texts in your reading and writing workshops? How is music part of your craft? Share your thoughts in the comments, or find me on Twitter @oosterheerte.

Elizabeth Oosterheert is a middle school language arts teacher and theatre troupe director in central Iowa. She loves writing, and sharing the stage with seventh and eighth graders. Her favorite stories are Peter Pan, The Outsiders, West Side Story, and Our Town. Recently, she finished writing adaptations of Arabian Nights and The Three Musketeers.