You Really Want to Add Statistics to That? Why we must write beside our students

My sophomore writers are working on their last writing assignment of the year: “spoken truth,” aka a speech on a topic of their choice, delivered to their classmates, using a variety of rhetorical appeals studied in class. For this fourth quarter piece, many students are writing about topics that matter to them personally and sharing the stories to show it. Kelly, a shy ELL student who has read the most books — in her second language, no less — than any other student in the class, decided to tell the story of losing her best friend to a drunk driving accident. Eli opened up about the importance of her cat’s companionship during a tumultuous time in her childhood, eliciting from a classmate who read it the very pathos that drove Eli to write it.

One of the strategies we’ve studied in mentor texts is parallel structure, especially in combination with the “rule of three,” a persuasive principle that three of anything — not two, not four — is the persuasive “sweet spot.” Before long, we were noticing the “rule of three” in everything we read. One student shared a passage from the introduction of So You Want to Talk About Race by Ijeoma Oluo: 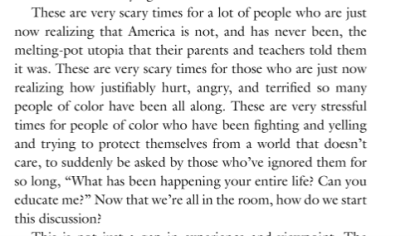 Students quickly identified the parallel sentence structure (“These are very … times …”) and the repeated questions at the end of the paragraph: Both appear in sets of three. This is not to mention the power in the raw honesty of the content, underscored by the strategy. This beautifully crafted prose takes great toil, a critical reality of the writing process that I know many of my students still don’t accept. So, I decided to use my own work-in-progress as workshop guinea pig.

Many students were struggling with the requirement to illustrate all three rhetorical appeals: ethos, logos, pathos. Those whose talks were based largely in facts and data weren’t sure how to make it emotional; those who told personal stories wondered if cold facts would detract from its power. About my piece, I asked students the latter. Here it is:

After I read the piece aloud, I explained my process for crafting the second half: I made a list of the specific harassing behaviors, those that would reiterate the point of the talk: I didn’t know at the time that it wasn’t ok. Another detail that I shared about my process was how long it took to go from the brainstorm to these 4 paragraph-lets: about an hour. Students were quiet for a few beats — one mumbled something about it definitely appealing to pathos — until Logan asked, “You really want to add statistics to that?”

What a fabulous question (and I’d like to think he knew it)! What followed was a brief but highly gratifying consideration of writerly choices. It was gratifying for me to witness these 10th-graders recognizing the craft of writing as a series of choices. More gratifying, though, was what I heard from two of my more reluctant writers: They both seemed to see, maybe for the first time, the difference between writing for a school assignment and writing to speak your truth. It may even have been the first time for one of them to recognize that the latter existed. And, for the first time, this student actually drafted words onto a page during class: a bulleted list of “bad results” for a young person who joins a gang.

Now, all of the above is dubious due to the questions that I know I would have if I were on the reading side of this transaction:

How did you find an hour to work on half a page of writing? I neglected two other tasks I had planned to complete and went to bed way too late. As a result, I was crabby when I told my periods 1 and 2 AP Lang & Comp classes that I needed another day to respond to their practice free-response essays. They weren’t happy, and neither was I.

Did magic really happen for that non-writer and his list? Magic, probably not. Maybe not even a completed assignment. But if that student comes away seeing how his own good writing might start out as a bulleted list or some other version of words on paper, and he put his words down, then he accomplished more than he had the day before.

There will never be enough time to do all we need to do with and for our students. And we will never reach every student to the degree that we wish. But I know that these practices are our best shot, and theirs.