I needed a book for my next student book club. I knew the book had to deal with war, literally or 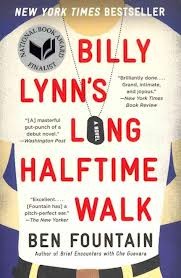 figuratively, in some way, so when I found Billy Lynn’s Long Halftime Walk by Ben Fountain, I had to crack the pages and give it a try.

I can see why Khaled Hosseini said this:  “Such a rich book. It’s angry, it’s moving, it’s compassionate, it’s dead serious, but it’s also really funny.” (I just finished re-reading A Thousand Splendid Suns as part of my students’ current book club. I trust this author.)

I’ve only read half of Fountain’s book, and I’ve marked almost every page.

Here’s a review in the NY Times in 2012. You can read how someone else likes this National Book Award Finalist, too.

Honestly, the last time I read something that struck me so emotionally was Yellow Birds, and I rave about it, too.

The story takes place at Dallas Cowboy Stadium on Thanksgiving Day. Bravo Squad is on a national tour “to reinvigorate interest in the war.” Billy Lynn, a specialist in Bravo, experiences moments of “pure love and bitter wisdom” as he meets the owner of the Cowboys, a born-again cheerleader, and various “supersized” players eager for a vicarious taste of war” (back cover).

Maybe I love this book so much because I’ve been there — sat in Cowboy’s Stadium and sort of thought similar things.

“The Goodyear Blimp is making labored passes overhead, bucking like a clipper ship in a storm. The Jumbotron is airing a video tribute to the late, great “Bullet” Bob Hayes, and displayed along the rim of the upper loge are the names and numbers of the Cowboys “Ring of Honor.” Staubach. Meredith. Dorsett. Lilly. This is the undeniable big-time, there is no greater sports event in the world today and Bravo is smack in the frothy middle of it. In two days they will redeploy for Iraq and the remaining eleven months of their extended tour, but for now they are deep within the sheltering womb of all things American — football, Thanksgiving, television, about eight different kinds of police and security personnel, plus three hundred million well-wishing fellow citizens. Or, as one trembly old guy in Cleveland put it, “Yew ARE America.”

They take the steps two at a time. A few people call out greetings from the stands, and Billy waves but won’t look up. He’s working hard. He’s climbing for his life, in fact, fighting the pull of all that huge hollow empty stadium space, which is trying to suck him backward like an undertow. In the past two weeks he’s found himself unnerved by immensities — water towers, skyscrapers, suspension bridges and the like. Just driving by the Washington Monument made him weak in the knees, the way that structure drew a high-pitched keening from all the soulless sky around it. So Billy keeps his head down and concentrates on moving forward, and once they reach the concourse he feels better” (21).

Not that I am in any way comparing my experience to a soldier’s. I just mean I’ve felt the hollowness of that place, and as I sat there in the leather seats of that stadium, I kept thinking: “Oh, the classroom libraries the money for this place could have filled.” Seriously. It’s huge. And frivolous in an embarrassing kind of way.

Maybe I love Fountain’s book because my four sons are football fans. My oldest son played on a state championship team. Huge deal. If you know Texas football, you know exactly what I mean. For almost two decades my husband I lived high school football — sometimes three games a week. That’s like nine hours on a bleacher.

Maybe I feel a tug into Billy Lynn’s story because two of my sons plan on joining the military. I’ve got about two years before that becomes a reality. (Right now they are serving missions. One in Puerto Rico and one about to leave for Taiwan. Missions then military. Both far from mom.)

I’m trying to show my students how literature can touch us, take us by surprise, raise our awareness, make us feel things we never imagined. That’s what is happening as I read Billy Lynn’s Long Halftime Walk.

That’s what I want to happen to them.

So I keep reading to find books for my student book clubs. Our next one starts after spring break. Students will choose to read one of the following. I am pretty confident everyone will find something that speaks to them (and we can practice analysis skills with pretty much anything.)

The Yellow Birds by Kevin Powers

The Things They Carried by Tim O’Brien

The Bell Jar by Sylvia Plath

Do you have any suggestions for books that have particularly moved you? I’ll add your suggestions to my TBR mountain.