I attended a conference in my district for language arts teachers. One of the themes was the importance of sharing stories that tell the truth. I also have the privilege of working on a postgraduate study in adolescent literature this summer with a professor who has mentored me throughout my teaching career. I’ve had time and space to write and reflect, and to reconsider how vital it is to share true stories (including our own) with students in the context of our reading and writing workshops.

Come with me, and I will invite you into stories I’ve been reading that tell the truth, and collaborative, creative writing experiences for our students based on a variety of mentor texts.

Daniel Nayeri’s Everything Sad is Untrue 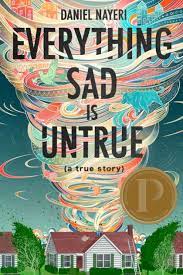 Daniel Nayeri’s Printz Honor winning memoir Everything Sad is Untrue, defies classification. While it includes true tales from Nayeri’s youth in Iran and in refugee camps before his family finds asylum in Oklahoma, it is also a fictional nod to Scheherezade, the famed storyteller from Arabian Nights who uses story to preserve life. The writing is so riveting and arrestingly poetic that I often found myself moved to tears, folding pages and highlighting passages as I read so that I could quickly return to them later. The true hero of the story is Nayeri’s mother, whom he describes as a relentless force.

Nayeri writes, “I don’t know how my mom was so unstoppable…Maybe it’s anticipation. Hope. The anticipation that the God who listens in love will one day speak justice. The hope that some final fantasy will come to pass that will make everything sad untrue…Unpainful”(Nayeri 346).

Fleischman, who is renowned for his Newbery medal winning book Joyful Noise: Poems for Two Voices, also wrote Whirligig, the story of one teen’s transformation from a murderer riddled with guilt, to a prince of tides.

After accidentally causing the death of Lea Zamora while attempting his own suicide, Brent Bishop’s penance, assigned by his victim’s family, is to create whirligigs and place them in each corner of the United States in their daughter’s memory. Though Brent doesn’t feel worthy of forgiveness, he considers that perhaps the decisions he made that led to Lea’s death don’t make him irredeemable. It’s possible that he is a beautiful mess just like everyone else. He also reflects on the longevity of the whirligigs he’s created, and the legacy he’s left behind.  “Maine summers, like dawn colors, were brief. Darkness and winter predominated…but his memorial would give off sound and color all year, holding back the tide of death…Lea would not be swallowed up”(Fleischman 125). Brent has morphed from a prisoner of his past to a prince of tides, free to roam and create a new life for himself from the ashes of his old one.

Thornton Wilder’s Pullman Car Hiawatha, The Angel That Troubled the Waters, and the World War I Poets…

I’ve written previously for Three Teachers Talk about how much I enjoy sharing Thornton Wilder’s Pulitzer Prize winner, Our Town with students, but Wilder also wrote a plethora of shorter plays beginning when he was a teenager longing for distraction from the monotony of algebra. He composed a variety of what he called Three Minute Plays for Three Persons, and one-act plays including Pullman Car Hiawatha, a play that was in many ways a prototype for Our Town, and playlets like The Angel That Troubled the Waters.

What’s fascinating about these plays is the way that they mirror human life by illustrating the miraculous in the mundane. They invite us to recall that even when we might feel like we’re in the gutter after an exhausting year of teaching, the stars are still shining. We only have to look up to see them.

Reading Wilder’s plays, famous World War I poetry, and letters written by a relative of mine who died in the Battle of the Argonne inspired me to write my own short play recently (an excerpt is linked here).

This year, during our study of stage and page poems, I would like to invite students to use a combination of World War I poetry and several of the poems that we read by living poets, to write their own scripts. This will give students an opportunity to write collaboratively from mentor texts, and to blend narrative, poetry, and maybe even pieces of their own life stories that might otherwise be lost to history and imagination.

Poetry Foundation has excellent resources for delving into the work of World War I poets such as Rupert Brooke, whose movie star looks

and ability to capture public sentiment in the early days of the war, gave him mythical status during his brief lifetime. Other poets whose work has endured include Edward Thomas, and Wilfred Owen. One of Owen’s most famous poems, “Dulce et Decorum Est,” has many different recordings on YouTube that are fantastic for classroom use. My favorite is this version performed by British actor Ben Wishaw.

I hope that your summer is filled with opportunities for relaxation, and also with reading of stories and poetry that move you with their beauty and honesty, and will in turn move your students in their reading and writing journeys.

Elizabeth Oosterheert is a middle school language arts teacher and theatre troupe director in central Iowa. She loves writing, and sharing the stage with seventh and eighth graders. Her favorite stories are Peter Pan, The Outsiders, & Our Town. She is currently writing an adaptation of Arabian Nights for performance in November 2021.