I am adding to the trend on the blog this week:  Editing!

I was inspired to re-read Everyday Editing and Mechanically Inclined by Jeff Anderson after Charles wrote about inviting students to notice, note, and imitate last month and earlier this week.  His philosophy influenced what I wanted my students to take away from crafting their final narrative piece–choice.  Anderson argues that telling students what or how to edit isn’t always helpful as it may not be internalized–students may seek a check-list for what to edit versus considering choices and playing with language as a writer. Anderson explains, “We want students to make choices and decisions that create meaning. Not because they’re afraid of making an error. Not because of crapshoot-fifty-fifty chances, but because they are thinking.  We want them to have ways to reason through what’s in front of them, what they see, what it sounds like looks like, means. A thought process” (10). All writing starts with merely getting your ideas out, but revision and editing happen when a writer begins to examine the choices they are or are not making. Choice is ownership in writing and far more rigorous than editing from a checklist.

In American Literature, we restarted our school year with a focus on narrative–we dug back into choice reading and ran through numerous laps of narrative writing, studying the choices authors made in mentor texts and our choice novels. Based on the narratives we had been studying together, students came up with a running list of moves we referenced as we wrote, revised, and conferenced. These core components, which students deemed essential moves of storytelling, formed what their final narrative would be assessed on:

For me, one of the most challenging practices to get my students in the habit of is revisiting and re-crafting their writing. We live in an instant society which I believe programs students to complete tasks versus sit and whittle away or tinker with their thinking. Hence, “Enhancement Rotations” were born (I didn’t want to call the rotations “edits,” but I have yet to come up with a better name, suggestions?). I asked students to bring in what they thought was their final draft–little did they know they would be producing a “new” final draft! My goal was for students to notice the impactful choices they had already made, but to stretch themselves to make more. To not edit grammar errors, but to re-craft with intention.

In summary, Enhancement Rotations consist of student drafts circulating the classroom and their peer experts suggesting ways to re-craft the outlined aspects of the writing assignment or genre (we used the list above), while also complimenting the elements present in the draft already. Students decide what component they want to be an expert on from our list, then spend the time suggesting and complimenting that element only. Once the draft has visited a group of expert Enhancers, the draft rotates to the next group. Eventually, all selections rotate to different experts and gain not only suggestions and perspective but a holistic, paper-based conference. 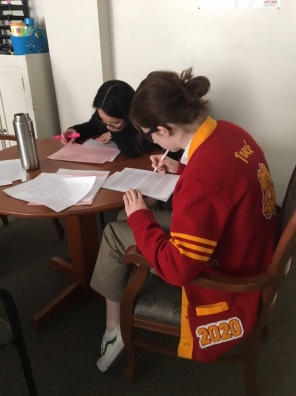 Here are my suggested steps in more detail:

Paola’s draft when from a removed retelling to showing, including a fake iMessage text feature from the suggestion of a peer. 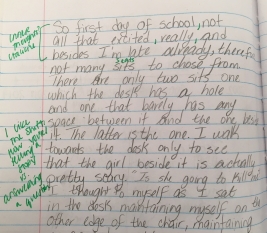 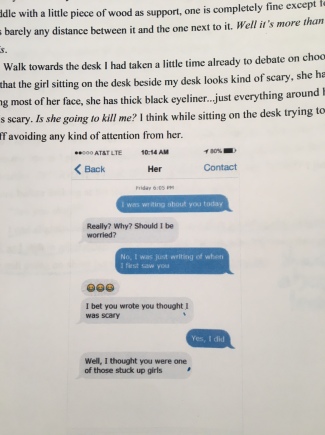 Abbey expanding on her feelings and emotions, moving her draft from a retelling a common experience to one that was more personal, adding depth to the experience and purpose.

Inviting writers to notice and note the choices their peers are making serve to strengthen their writing, too, as we know more exposure leads to more thinking and understanding. My writers are beginning to notice the craft and creativity writing offers. Additionally, sharing writing and conferences continues to build the community of writers, and revisers, we are striving to become.

Maggie Lopez teaches American Literature and AP Literature in Salt Lake City, UT. She started reading Educated on her snow day last week, the first in 30 years, alongside Everyday Editing. You can find her on Twitter @meg_lopez0.

One thought on “Enhancing Student Writing: Framing Editing as Choice”