It’s the time of year when it’s important for students to reflect on their identities as readers. There is so much growth to celebrate – whether it be in disposition, habits, knowledge, fluency, or attitude.

Even though I see their growth, it’s important for our students to own it themselves, and to develop their own sense of identity instead of relying on my impression of who they are.

So we spent a little class time thinking and reflecting.

I asked them some questions to get them started. Who were we as readers when we started the year? How do we identify as readers now, and where do we want to be as readers at the end of the school year? What might that look like?

Now remember, I live in Nicaragua, the land of lakes and volcanoes.

We have lake and volcano views from our school. It’s stunning, and it’s part of our daily landscape. It’s what we know.

The island of Ometepe in Lake Nicaragua

As we discussed what it means to have a reader’s identity, some of my seventh grade students struggled. They weren’t sure how to describe themselves, and they weren’t seeing their growth over the first half of the year.

Somehow (some moments in teaching defy description) we got to the idea of volcanoes. That we can all be a different type of volcano, and that it can describe who we are as readers.

We discussed four types of volcanoes: extinct, dormant, active, and exploding NOW. We soon decided to toss out the extinct volcano as a possibility, because there is no one in the class who never reads.

We described the three remaining possibilities, connecting reading identities to types of volcanoes: 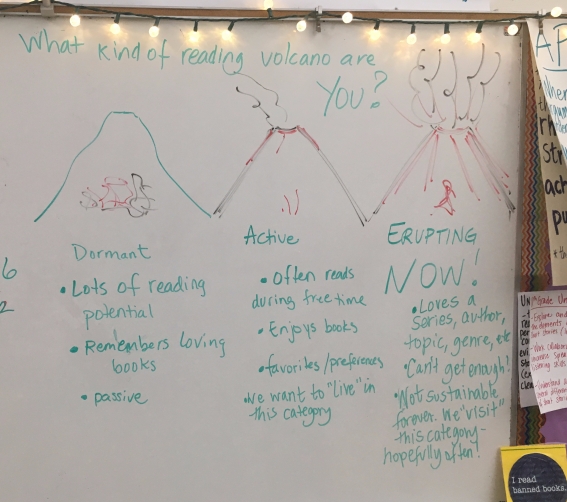 This illustration helped student visualize who they are and where they want to be as readers. They started to reflect and set goals, and realizing that they have identities as readers, and that those identities can improve and evolve.

I took our class ideas and created a simple reading volcano infographic that now hangs in our classroom library:

Julie has been teaching secondary language arts for twenty years, spending the first fifteen in rural Central Oregon, and the last four in Amman, Jordan. She’s thrilled to report that she and her family have moved across the world to Managua, Nicaragua this year, where a new adventure has begun.