About this time, every year, I begin to feel that itch, that urge to chuck everything I’m working on right now and start planning for next year. Maybe it’s the feeling of spring in the air, but I always find myself frustrated with how I spent my time this year and wanting to start fresh and clean for next year. So, as I move into test review mode, I begin my wish list for this year and vow to do better in August. It goes something like this:

I wish that I had frontloaded this idea more in August….next year I’m going to frontload so hard and here’s how…

I think it’s pretty easy to recognize the “I wish” road as a treacherous one to travel down. But, honestly, for me, that urge to start planning for next year in the middle of this year is the real danger.

See, all of the end of the year countdown clocks act as siren songs, pulling me into the excitement of planning for a new school year: new pens (because they help me plan better), PD books (I’m starting with 180 Days), Google Folders (because I’m nerd, this will never not make me happy). I’m getting antsy just thinking about it.

And so I find myself eased into bright, happy, shiny thoughts about how perfect next year will be. I look forward to the excitement of a brand new group of students, of a summer spent immersing myself in practice, of all of the hope a new year of school brings.

And I know these are dangerous waters. I also coach volleyball, and, in that context, I would immediately recognize this behavior as problematic. Whenever my team thinks about Tuesday night’s game before Monday night’s game, we have a rough night. We can’t think about the district tournament in October until we’ve handled August. I would put a clamp on that kind of thinking right away on the court. And so, I’m realizing I also have to lock down my mid-April urges to plan for next year.

Because, in a nutshell, champions finish the way they start.

I think we have to approach the end of the year the same way we started it – fired up, focused on the tasks at hand, bringing that same excitement and hope and enthusiasm to each LONG day of testing and test prep. Don’t our students sitting in our classrooms right now deserve that? Don’t they deserve to know that we’re happy to see them each day they enter our classrooms, not counting down the days until they leave? Don’t they deserve more than filler? Don’t we deserve to be present in the moment, enjoying where we are right now in our journeys together?

But what is there to be excited for during testing season?

Great question. I teach in TN – testing has been… rough… this week.

However,  I’m particularly excited about three activities between here and our AP Lang and Comp test. These are pretty common activities among AP Language teachers, so I’m not presenting anything new here or even my own ideas (good teaching is good stealing according to Harry Wong), but sharing some ideas that have worked for me. They are tried and true ways to keep students involved, interested and invested on this downhill dash to the test:

1. Rhetorical analysis – Role playing. We’re currently role playing as Abigail Adams writing a letter to her son John Quincy. Students pair up (one is Abby, the other is a dear friend there to offer advice) and craft a letter to her son, encouraging him to take advantages of all of his opportunities. Then we read and analyze her actual letter to him. This is a pretty common AP lesson, but it’s new to this class. The simple act of role playing really deepened our discussion of rhetorical analysis and provided lots of AHA moments along the lines of “You’re right! She DIDN’T sit down and think ‘I need four rhetorical questions and one use of asyndeton. She thought about her large and small goals and worked from there!’” Students left with a better understanding of what to notice in a RA and how to organize their essay around ideas instead of devices. Surprisingly, these letters also showcased an almost aggressive level of voice. It was productive and fun – the perfect way to spend a test prep day.

Here are some examples culled from today’s writings. 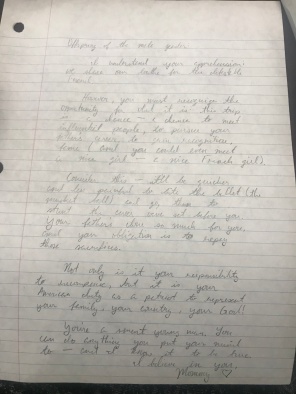 3. Argument  – Speed dating. Five to six thought-provoking prompts are posted on the board one at a time. Students have four or five minutes to brainstorm claims, evidence, organizational structures and a theses. We whip around the room, sharing insights and approaches, curating a list of universal nouns or excellent pieces of evidence, creating ideas that students can tuck away in their back pockets before the test. I love this activity. There’s such great community in the sharing of ideas while also mimicking the time crunch of the written portion of the test.

Hopefully, none of the ideas feel like test prep. Hopefully, it’s just more learning. Hopefully, we find ourselves excited to be in English, fully present in the moment, enjoying our productive time together. The thoughts and ideas for next year can percolate until the end of May.

Sarah Morris teaches AP Language & Composition and Film as Literature in Murfreesboro, Tn. She plans on watching two episodes of Buffy the Vampire Slayer for Friday’s Film as Lit lesson. She realizes how very lucky she is that this falls under the category of  “Something She Gets To Do At Her Job For Money!!!!” She tweets at @marahsorris_cms.