March Madness – A Book Bracket that Breaks a Few Rules

As I write this post, I can’t help imagining what it will feel like at this time Thursday night when I am up to my eyeballs (finally) in all things Spring Break. I’m envisioning an episode of This is Us, an adult beverage, and perhaps some Easter candy the bunny just won’t get a chance to deliver. Maybe I’ll throw caution to the wind and rent a movie, stay awake for the entire thing, and put extra butter on my popcorn. Don’t try and hold me back, friends – I’m going to let ‘er rip. This girl is going to calorically navigate every day of this vacation.

Sometimes we need to break the rules.

Now I know, if I were you, I would be reading on in great anticipation of a reflective post that smacks at the very heart of pushing aside what’s prescribed and going instead with the deeply personal, life-altering, philosophy-bending, workshop work that fuels lives rich in reading, writing, and empathetic connections across our school communities.

Well…did I mention I am only four class periods away from vacation? 344 total class minutes. 18 total hours on the clock. 27 miles there and back to my nice warm bed. Dozens of warm smiles and well wishes for a well-deserved break to all my lovely students and colleagues.

Some will voyage to lands far and wide. Some will go on great adventures.

I will gladly go to my couch. My brain is fried.

As such, I wanted to share with you my experience with a March Madness Book Bracket, in the hopes that if you haven’t tried this yet, you’ll consider it for next year, or even better, you will ditch the March Madness component and just create your own Book Battle for April or May of this year to stir up passions around the current favorite titles in your classroom.

Our school is blessed with a great number of hugely passionate, committed, and just all around awesome teachers and administrators across the building. This past month, Franklin saw the advent of our annual March Madness school-wide event. The incomparable Pat Gain, AP Environmental Science teacher to the stars, organizes an extravaganza the brings the whole school together in excitement, friendly competition, and support of Franklin’s Relay for Life and Best Buddies. Students earn raffle tickets for possible school spirit, teams organize to battle it out on the court, and the entire school gathers for a pep rally to watch the championship games and other fun at week’s end. This year, it inspired me to jump on the bandwagon and create a book bracket in my room.

After the fact, I found this awesome March Madness Book Bracket that includes book trailers, printable brackets, a bracket reveal video, and the wherewithal to organize it all way ahead of time and share it so classes across the world can vote. You can vote in their championship matchup between The Hate You Give and Scythe right now! These people have t-shirts. It’s legit.

Meanwhile, I’ll be over here with my humble pie and share with you what I did and what I want to try to do for next year.

First, a disclaimer. I said I broke rules. I did. But it still worked.

But it all worked out. Check it out below.

Franklin March Madness Book Bracket Every Year From Now On… 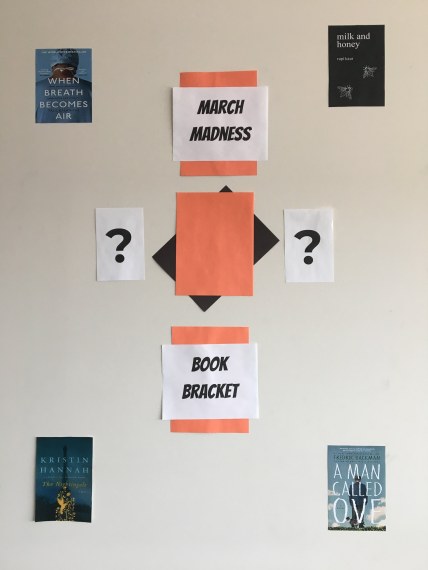 My March needed a bit of madness and I look forward to doing it again next year. Though we didn’t have any actual brackets to fill out ahead of time, or league sanctioned seeding, or even actual matchups past the first round, the results involved a whole lot of passionate talk and writing around books.

When students hustle in the room to see which books are winners, as opposed to hurridly taking one last glance at their phones before the bell rings, I consider it a slam dunk.

(He he…told you I needed a vacation).

Our bracket is down to The Nightingale by Kristin Hannah and When Breath Becomes Air by Paul Kalanithi. Which one would be your winner? Which books could go the distance with your classes this year? Please leave your comments below!

Lisa Dennis teaches English and leads a department of incredible English educators at Franklin High School near Milwaukee. Her knowledge of basketball is limited, but her support of underdogs is fierce. Let’s Go, Loyola! Follow Lisa on Twitter @LDennibaum.