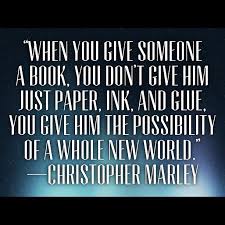 Angel slept with Trash in his hand for almost the entire first semester.

I hope you caught the italics in that last sentence, but nevertheless, Andy Mulligan’s tiny novel was his first choice for the semester, and Angel would not put it down until he finished.  No, he didn’t even put it down when he dozed off.

We battled the whole first semester.  It was a whispering battle which I tried to handle delicately. I nudged him during reading time.  I conferenced with him.  I suggested new books that he might have found more interesting.  In our conferences, he would say, “Mrs. Paxson, I’m just not much of a reader.”  It wasn’t the usual tone of determination and resistance I heard coupled with this sentence.  I have the occasional student gripping the desk or running in the other direction for fear the Love of Reading will catch them.

Instead, he shook his head and hung it with disappointment–even embarrassment.  It was as though this wasn’t something he thought, but something he was told.

He finished Trash at the end of the first semester and started The 5th Wave over the break.

When we came back this semester, I noticed Angel kept leaving his book at home, and picking up Noggin’.  He said two things that caught my attention at the beginning of the semester.

First, he asked me, “Mrs. Paxson, you mean it’s okay if we switch books?”  I emphatically said, “OF COURSE you can switch books!  Your reading life is too important to read what you don’t like.”  It seemed like he was afraid to mess reading up, to defile it or do it wrong in some way.

Second, when I asked the class what they’ve noticed about reading throughout the year, he reluctantly raised his hand, saying, “You know, I’ve actually noticed I read a lot faster now.”

A few weeks later, I extended an opportunity to my ever-drowning sufferers of Senioritis.  I proverbial life-preserver was an opportunity to drop a low daily grade if they had accomplished at least three reading challenge squares.

Again, reluctantly, Angel walked up with a half-finished Noggin’, and asked, “If I finish this book and one more, a total of three, I can have a grade dropped, right?”  This imperfect teacher had some doubts, considering Angel’s history of finishing books and also considering the tendency for seniors to game an opportunity like this.  I said “yes,” but made sure to clarify a few points.

About three days and an equal amount of frantic e-mails later, Angel came into class having finished his books.  He was so eager to talk to me about his ‘feat that he begged for a reading conference.  He beamed from ear to ear as he said, “This book looks old, and it IS. My middle school teacher recommended it to me and I threw it under my bed and never read it.  I pulled it back out and I couldn’t stop reading till I was finished.”  He spoke of the book .  Second, when I asked him about his second book, Noggin’, he detailed the story and the surprise ending with such confidence and nuance, I had no question he read and LOVED the book.  After our conference he said, “Don’t worry, I’ll send you a summary of the books so you don’t think I cheated and didn’t read.”  I explained to him that the conference was all I needed.

Besides, didn’t he give me so much more than he would achieve in a summary?  Angel showed me an enthusiasm, a drive to learn, and a new-found fervor to read that would not quickly fade, but would likely grow in the years to come.  Angel showed me Book Love. 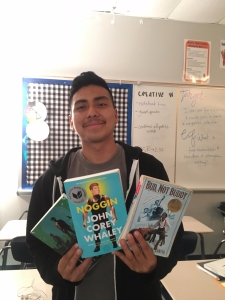 I asked Angel one more question as we walked back to the bookshelf to find his next read. Me: Hey, have you ever read three books in a matter of months before?

Him: Yes, it really does.

Jessica Paxson is an English IV and Creative Writing teacher in Arlington, TX. She also attempts to grapple with life and all of its complexities and hilarities over at www.jessicajordana.com. Follow her on Twitter or Instagram @jessjordana.

5 thoughts on “#BookLove and #BookPride”