This past weekend, Tom Newkirk tweeted about writi

ng fluency and the value of “self-prompting,” and he included a list of a dozen+ prompts that foster such fluency. For Tom, these prompts “swirl in his head” as he writes. For our students, we need to build the habit of prompting questions into their process. Whether through daily writing, regular conferring, or sheer faith in the possibility, many students this year have discovered the true generative nature of writing — a sentence begets a sentence, begets a sentence, and so on. Alas, too many have not.

Our students hear from published poets and slam poetry veterans (our school librarians put on a magnificent Poetry Week every year) about lengthy revision processes. They view interviews with their favorite authors who explain the grueling evolution from idea to draft to revision to “finished” piece. They read lots of writers on writing about the toil of the work. Still, more students than I care to admit still believe in some divine inspiration behind the magic of words on a page, which one either receives or does not. And, to try to write without this inspiration (as in, every day in their Writer’s Notebooks) is a futile endeavor.

Tom’s recent tweet seemed divine in its timing. The day before, as an in-school field strip, 10th-grade English classes participated in a workshop with storytellers from Chicago’s 2nd S 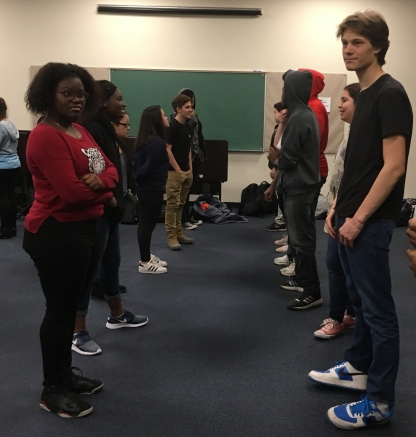 tory, an organization that holds storytelling events, workshops, and education in the value of story — in both the telling and the listening — as the source of human connection. The name 2nd Story refers to the very nature of story as generative: one shares a story of their own experience, which inevitably reflects some aspect of the universal, and then invites others to do the same.

Presenters shared their own stories, which included universals such as losing our youthful belief in things magical, facing our greatest fears and living 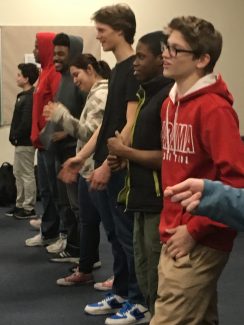 to tell, proving we’re capable of what others believe we are not. Then they got students up out of their seats in parallel lines or inside-outside circles, so humans faced other humans, screen-free. First, students shared one-sentence stories based on prompts like “I felt [insert emotion] when …” or “Tell about a time when you … broke or ruined something … told a lie … received a gift you really wanted (or not) …” Lines and circles shifted and rotated to maximize the quantity of faces in contact.

Sure, it was awkward and scary at first for many — if not most — of these 15- and 16-year-olds, who may or may not have met before. Gradually, though, as stories even as brief as one sentence were shared, it became less so.

In one of the two workshop rooms, students talked in pairs, sharing their stories by

elaborating on one of the prompts from the first part of the exercise. I could hear the energy in the room even before I was fully in the door. Moving through pairs of students, I could hardly hear the stories themselves, but no matter.

What mattered was that students were hearing them from their partners, many of whom started out as strangers (different classes were blended into one workshop). And not just hearing, but listening. They began, literally, to lean in, closing distances through shared stories and the natural empathy that results. When we return to our regular classrooms this week, students will begin recording their stories on FlipGrid, listening to and commenting on one another’s without the high stakes and vulnerability (even unfamiliarity) of face-to-face, real-time human interaction. Which reminds me …

I’d like to pause briefly to offer this qualifier: On-demand, face-to-face, forced interaction with strangers is not every 10th grader’s cuppa tea. (Heck, it’s not every adult’s cuppa, either.) In fact, several students literally waited it out on the sidelines. But even these reticent, reluctant, and even recalcitrant folks couldn’t help but listen — and be drawn into — the stories of others. And maybe even, as a result, classmates who were still strangers became less “other” than they had been 90 minutes earlier. I’m even holding onto the possibility that the stories heard that day will sustain their generative power and elicit even more — not only more stories, but more listening, more “leaning in,” more empathy, even more inspiration: not from any divine spirit, but from engagement with each other and with the work of writing — and speaking — their truth.