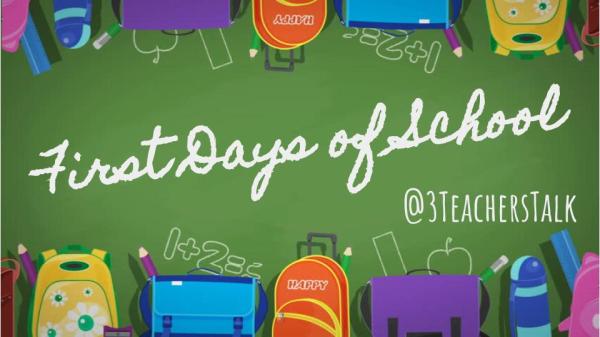 Happy Back-to-School, everyone!  I’ve been missing around these parts lately because I squeezed every single ounce of summer out.  Then I tried to squeeze some more.  It was fantastic.

Here I am, three days into the new school year, and my body hasn’t yet adjusted to the lack of constant caffeine influx.  It feels kind of like being hit by a train, and having to get up on stage and still perform.  You all know what I mean!

In the past, the beginning of the year has been stress-on-stress-on-stress.  According to most educational circles, you have to utilize THE FIRST DAY to create a classroom culture, show the students who you are, help them get to know each other, communicate your expectations, and don’t-you-dare-waste-a-minute-of-real-instructional-time (a.k.a. get some content in there, too).  Phew.  I’m out of breath.

This year, I approached the beginning with less of a scarcity mindset.  At least, I tried to.  I mean, a great classroom culture–much like Rome–is not just “created,” it’s built, isn’t it?  It is.  Especially if we want a culture, not just a community.

Brick by brick, my friends.

So here are a few of the bricks I’m starting to hoist, pile, place, and hope that the structural integrity of the workshop classroom begins to take shape sooner rather than later:

First Day: Create something together.  This year I decided not to talk about books on the first day (gasp!).  I know.  I was floored, as well.  The thing is, I love my initial talk about books and choice so much, I didn’t want the initial change in classes, etc., to excuse any students from my soapbox.  So I did a rockstar lesson (credit to my awesome friend, Jen Fuller for the idea) on the first day.  Students were to choose two or three items from my pile o’ crap (excuse my language), combine them to make an original product, then write a commercial to sell that product.

What I wanted to accomplish:

Why I think it worked:  This activity was awesome for a few reasons.  First, just as Susan said of her first day plan, it had the novelty factor.  Students were expecting to be bored to death with the aforementioned, traditional pleasantries.  Second, sometimes the hardest part of writing is the fear.  I told Lisa, “I obviously want to get to baring our souls, but that’s HARD.  Especially on the first day.”  This activity gave them someTHING to write about, to talk about, to create.  Third, it helped me assess how the students work in groups, even on the very first day.

What will happen next?

Next, we will talk about choice.  We will pass books.  We will go over possible difficult scenarios that might happen in a classroom (again, not my idea), and discuss how we would handle them with kindness, seeking to listen first and understand.

Originally, it was logistics that kept me from my traditional First Day plan, but I think it worked out better than I could have imagined!  It was a great first brick.

AND NOW WE BUILD.

What bricks have you chosen to place into the first weeks of school?  What are you trying to build?

Jessica Paxson teaches AP Language and Composition, English IV, and Creative Writing in Arlington, TX.  She is currently pursuing her Masters in Educational Psychology and GT education, and dreaming of a home free of construction materials and boxed-up books.  If you are a fan of candid vulnerability, you can catch more of that over at www.jessicajordana.com. Follow her on Twitter or Instagram @jessjordana.

7 thoughts on “Classroom Culture Wasn’t Built In a Day”