Mini-Lesson: The Simultaneity of Instants by Jessica Paxson

I am an anti-bandwagon jumper.  I tend to think if everyone is flocking toward something, I’m likely too cool for it.  I attribute that to my father, and I’ve discussed it before, but that’s beside the point. 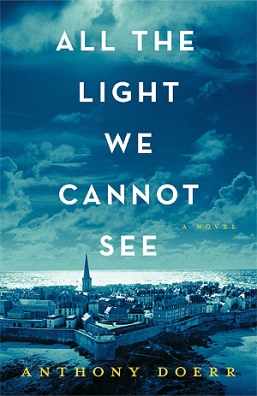 This year, as I made the venture to RWW, I knew I would need to read lots of buzz-worthy books, simply for the purpose of recommending.  Needless to say, I have slowly been broken down from my rigid ways. It’s because of this anti-bandwagon mentality that I am so late to the Anthony Doerr party, particularly in respect to All the Light We Cannot See.

I decided to tackle this novel over Christmas break because of how many people had recommended it to me.  I was reluctant, but of course, Doerr drew me in with his utterly gorgeous descriptions of difficult cultural situations, the relationships between characters, and the flawless knitting together of a nonlinear storyline.

So.  I’m a fan.  Likely at least two years after everyone else, but better late than never, right?

I was specifically intrigued by one of the chapters near to the end, entitled, “The Simultaneity of Instants.”  This chapter reminds me a little bit of the montages that occur at the end of a movie or a season finale in which all characters come together for a final appearance.  The only difference with this chapter is that they did not come together in the same place, but simply in the same moment.  I thought this would be a great way to coach my students through describing an important moment with a bird’s eye view.

Objective: Students will describe an important moment in their life by also providing a glimpse into that same moment for other “characters” in their story.

Lesson: First, students will begin by writing about a specific moment that they remember vividly.  You could draw from many different forms of pre-writing for writing about memories, but a few of my favorites are Writing Territories and Blueprinting.  After students decide on a moment that was important to them, we will do a quick draft for about 10 minutes.

Next, students will begin to brainstorm about what other people might have been up to at that very moment.  The key here is for students not to get hung up on what actually happened, but to simply imagine that moment in time from a broader scope.

Finally, after brainstorming simultaneous instants, it’s time to weave them together.  This is the moment in which Doerr’s writing as a mentor text will be unequivocally valuable.  Students will ask, “Well, how do I know which moment to put where?”  And I’ll say, “What does the mentor text do?”  And on and on until we have pieces of writing of which the students never imagined they would be capable.

I hope to do this along with my students, and I’m particularly imagining a Simultaneity of Instants starting with the Presidential Inauguration, or Obama’s farewell wave, or something to that effect.  I may already be blubbering as I brainstorm.

I teach Seniors and Creative Writers.  While my CWers will work on this concept soon, I may save this for my Seniors until their end of year MGPs (anyone want to help me plan?).  I think an imaginary Simultaneity of Instants as they walk across the stage.  This will end up resembling an end-of-an-era-montage, and I can’t wait to see what they come up with!

Jessica Paxson is an English IV and Creative Writing teacher in Arlington, TX. She also attempts to grapple with life and all of its complexities and hilarities over at www.jessicajordana.com. Follow her on Twitter or Instagram @jessjordana.

4 thoughts on “Mini-Lesson: The Simultaneity of Instants by Jessica Paxson”