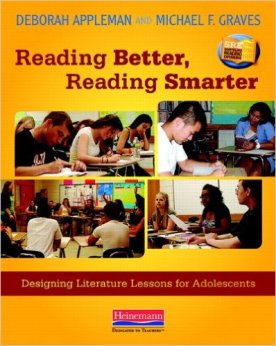 When I hear teachers underestimate their students, it really grates on me. Setting high expectations that aren’t always met doesn’t translate into failure on anyone’s part. It simply notes varying levels of understanding. With time and repeated exposure, all concepts and skills we want to teach can be worthwhile.

I had such a conversation a few years ago with a Ph.D. literature student who had spent some time as a high school English teacher. We were discussing the resource classic “Critical Encounters in High School English: Teaching Literary Theory to Adolescents” By Deborah Appleman. I said that I loved the idea, as I didn’t get much exposure to literary theory in high school — or college for that matter. She disagreed, arguing that “in high school, you’re just not ready for it,” and that literature instructional time would be better spent on close reading.

I still think students are ready for it. We live in a complicated world and teach in highly-politicized public school environments. High school students — and all of us — could take more time to view our surroundings through critical lenses.

Appleman says so herself:

“Literary theory is not intellectual cake for adolescent cake eaters — those who are privileged by social status and other factors to have significant educational advantages. Because many of the theories deal with issues of power, students on the margin, for particular reasons — ethnicity, class, ability — are often more receptive to the basic ideological premises of these theories than are their more privileged peers, who sometimes view theories such as those of gender and class as mechanisms for using the master’s tools to dismantle the master’s house.”

But how to introduce these critical lenses? Of course, students need a concrete definition of each lens as a start. They also need texts that strongly suggest analysis with each of Appleman’s chosen lenses.

Resources that lean toward direct instruction just won’t do either. The readers’/writers’ workshop centers itself around authenticity and treating each text you introduce to students as a work that can stand on its own. It isn’t about supplements, but about connections.

So, it’s got to be something short, familiar, and striking enough to make them remember the learning when they’re analyzing other texts later in their lives.

Yes, Bugs Bunny, Tom & Jerry, Yogi Bear and all those other other goofy, googly-eyed weirdos; you get a small story that’s entertaining and rich with material to pick apart.

Here are my suggested cartoon pairings for Appleman’s lenses. Try one out when you need students to understand critical literary theory, and let me know how it goes!

Begin with a classic! While “Steamboat Willie” wasn’t the first cartoon short ever, it’s the first with synchronized sound and it’s synonymous with Walt Disney. Simple in its form, it gives students a chance to offer their interpretation of the text — the essential element of reader response theory — as well as comment on the form of the cartoon short.

This one’s a personal addition, because it isn’t in Appleman’s book, per se. It’s much needed, though, as many of the texts bureaucrats approve for schools lack diversity. This particular short features the recurring “Tom & Jerry” character Mammy Two Shoes, a classic example of the mammy archetype that shows how texts can perpetuate stereotypes and prevent us from recognizing the individual as part of diversity, and not a generic “other.”

Henery the Chicken Hawk and ultimate Southern gentleman Foghorn Leghorn battle over farm capital — the hens — in this short. Each character is confined to a particular role in the farm society, and Leghorn gets to use the knowledge afforded through his age and social status to succeed in keeping his and the farm’s wealth.

In one of Bugs’ many gender-bending shorts, he poses as a Southern belle as a last resort to thwart his adversaries. Here, you might ask students why cross-dressing Bugs is taken so lightly as opposed to his true self? Cross dressing is a common gag in comedy, so this cartoon also opens up discussions as to why the act is so funny.

Bugs Bunny runs circles around the subject of the classic Longfellow poem. While the cartoon Hiawatha can be interpreted as a stand-in for Elmer Fudd, he also becomes the brunt of Bug’s antics. It can start a dialogue with students about how colonial powers can marginalize aborigines through cultural works after they’ve already conquered them politically, economically and socially.

Daffy Duck is ready to star in a cartoon, but the cartoonist keeps changing the rules of the game on him. Bit by bit, the animator rips apart each part of the cartoon: scenery, setting, clothing, sound, etc. Daffy’s frustration grows each time the cartoonist makes a change, precisely because those changes are a contradiction to the Looney Tunes form and what fans have come to expect from his character. This is the essential pivot of deconstruction, and probably one of the most concrete — and hilarious — examples on the list. My personal favorite!

Try one or all of these cartoons as part of your next reading unit and let me know how it goes. You’ll be surprised what connections students can make with applicable examples of each literary theory.

Michael Janney, 9th grade English teacher, Yearbook advisor; Shepherdstown, WV
When I sit down to read a book or write, I’m not concerned about circling the nouns or verbs. I’m not concerned with labels or checklists; right or wrong. Instead I’m focused on purpose and aesthetic— authenticity. If we want our students to become authentic readers and writers, we have to offer them experiences in the classroom that transcend the artificial routines of school culture. These experiences must include choice, creativity and validation so students can realize their power as readers and writers in the grand conversation of English/Language Arts.
Contact: mwjanney@gmail.com