This summer, we’d like to return and talk about some of our most useful, engaging, or popular posts.  Today’s post, written by Jackie in 2015, shows us some great possibilities for back-to-school booktalks.

Please return to this topic and talk with us in the comments–what are some hot titles you’ll booktalk as we return to school this year?

“I’m not a reader.” I hear this multiple times during my first weeks of conferencing. The non-readers are easily identifiable; their body language alone speaks volumes of their disdain for books.

“You just haven’t found the right book,” I tell them, and they smirk, knowing they’ve heard that statement before.

The first week of school is a vital week of matching students with books, and while I itch to recommend titles, I hold back, giving my freshmen the independence and freedom they so desperately crave in high school. Too often students blindly accept recommendations without so much as a thought to the contents. They lack self-awareness when it comes to their reading interests or style, which is why those first two weeks are essential to not only organizing but also empowering them through choice.

Throughout the week, I book talk popular titles, engage in “speed dating” with books, and provide ample free time for students to explore our classroom library, but I also get out of their way. Instead of telling them what to read, I model ways to find a strong candidate, considering reviews, awards, contents, genres, and summaries.

While the majority of the class tends to quickly settle into their books, there are always stragglers who remain convinced they’ll never enjoy reading. These students sometimes grab the first book they see off the shelf, and oftentimes these books are too dense, difficult, or in some cases “boring.” That is okay! I settle into conferences with these students, getting to know their hobbies and eventually handing them two or three books that might pique their interest. In the end, they still choose what to read, but in the process they might require some initial guidance. 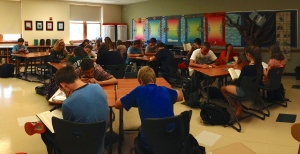 Regardless of who picks the book, the end result remains the same—to find a plot that envelops and consumes students, forcing them into the story. Here are some of my number one titles that tend to break down the shell of even the most reluctant readers.

Ready Player One by Ernest Cline

I’ve already had three students read this book, one of which is Leah, a gamer and self-identified non-reader. When I asked if she has ever had a favorite book, she thought for a second then said, “I think this one might be the only book I’ve ever really liked.”

The Compound by S.A. Bodeen

Adrian initially picked a sequel to a book he read last year. “You must have liked the first one then?” I asked.

“Not really,” he replied. “I just didn’t know what else to read.” The next day he picked up The Compound, which is full of the fast-paced suspense he craves.

Paper Towns and Looking for Alaska…and basically everything by John Green.

I chased Emily up the stairs for this recommendation. When I asked her which one sparked her interest in reading, she said she couldn’t remember which had sucked her in. She just knew that despite her protestations at the beginning of the year, by the end she “loved them both.”

The Eleventh Plague by Jeff Hirsch

Damion had only ever loved one book and he was bound and determined not to like any in my classroom; that is until he came across this futuristic, survival story. Upon sitting down beside him for a mini-conference last year, he looked away from his book briefly to say, “Ms. Catcher, I’m at a really good part and I can’t talk right now.”

“I’ve had people give me ‘dark’ books before, but they aren’t dark at all,” Sarah tells me. I hand her three options, one of which is Gone Girl. Three days later she tells me, “I’ve spent my whole life hating books, and you’re the first teacher who ever found one I actually liked.”

I book talked Unwind second this year. It’s a given crowd pleaser because of its twisted plot and graphic scenes. The fact that I only have one copy of my four originals is a testament to its popularity.

The Perks of Being a Wallflower by Stephen Chbosky

Carter claims he hasn’t read a book cover-to-cover since third grade, but he has fallen in love with Chbosky’s classic on teenage life. He said to me today, “Ms. Catcher, I love that this book talks about real things, things that are actually happening to us.”

“That book is only the beginning, Carter,” I said

What books do you recommend for reluctant readers?  Which titles are most popular in your classroom?