Guest Post: I’ve been thinking about Ghosts or What I’ve learned about the power of mentors…and time by Elizabeth Oosterheert

“That version of the story–that version of my life without my husband in it–is a ghost I carry around with me. It’s always there, beneath the surface of my real life. I feel…so grateful that this big, messy, joyous life isn’t a ghost life, but mine…” 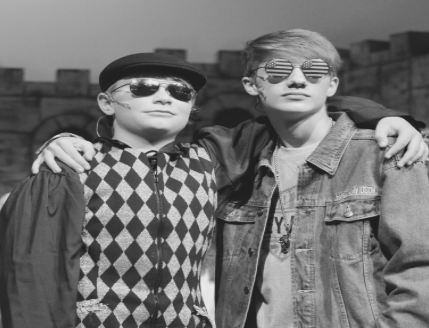 Joe & Toby after a performance of the 2018 play, Merlin’s Fire

If you’re like me, when the end of the school year arrives, you entertain the ghosts of what might have been. These lingering ghosts are questions like:  What if I had spent more time conferencing with that student? What if I had found this mentor text a little sooner? What if I had done more mini-lessons about . . .

I learned a few lessons during this past year I hope will have a positive impact on EVERY facet of my readers’ and writers’ workshop for next year. My teacher’s soul already knew this, but I recognized more powerfully than ever before that the right mentor texts at the right time, combined with enough space to explore craft moves and to write about things that matter, makes all the difference.

My students love what I call food literature (thanks to @KarlaHilliard for this amazing idea!),  a writing study we do after Christmas composed entirely of reflections about food. This takes the form of food narratives, poetry, listicles, or critical reviews.

We study mentor texts, and then students choose a direction based on the ideas they’ve developed in both handwritten and digital notebooks.  After discussing many mentors, and highlighting craft observations, students list powerful descriptive words, make notes about the writer’s voice,  and practice composing complex sentences based on passages in the mentor pieces.

I encouraged my students to consider food in the context of specific flavors and seasons.

Childhood and adolescence have unique tastes. December has a far different flavor than July. What we quickly noticed is that food literature is about so much more than what is on our plates. It’s about savoring cherished memories.

Another frame that worked well for food narrative that is also very effective for other kinds of autobiographical writing is an idea adapted from Penny Kittle that I call Then and Now:

When we write Then and Now snapshots, we admit that our understanding of everything from food, to sports, to relationships evolves as we age and learn how difficult it is to be a human being.

Three new mentor texts spoke powerfully to my students. One was “Carrying the Ghosts of Lives Unlived,” published in the Ties section of The New York Times, written by Kate Hope Day. While this piece is NOT about food, it is about how, in Day’s words, “There are hinge points in time when life could be one thing, or another.” My students applied  this mentor to our food study, writing about different life seasons, and how sometimes seemingly small decisions have a BIG impact.

Another New York Times piece that was very helpful to us  was “Christmas Fudge and Misremembered Snow Cream” by Rhiannon Giles.  I composed a piece for my students based on this mentor about the flavors of my childhood.  An excerpt is linked here.  Students then wrote about their own life flavors, recipes, or memorable meals.

Finally, we studied “Ode to Cheese Fries” by Jose Olivarez. What I love is that my discerning, sensitive, wondering students used that poem to create beautiful reflections on some of their fears about adolescence and daily pressures assailing them. In his poem, “Pack of Ranch Sunflower Seeds,” Toby, one of my eighth grade authors, wrote:

What if I’m the small seed

With a big shell

Waiting in the bag

Pleading not to be eaten up

And my inner seed gets revealed

And my outer shell is thrown out and trampled

The rest of Toby’s poem is linked here.

Our food study is a ghost that haunts me, because I hope that I can continue to make it more authentic. For now, though, I have to remember to be grateful for the time and the writing that was — and in the words of Mary Oliver, give thanks for my “one wild and precious life” and the students’ lives that intersect with mine every day.

Elizabeth Oosterheert is a middle school language arts teacher and theatre troupe director at Pella Christian Grade School in Pella, Iowa. She loves writing, and sharing the stage with seventh and eighth graders. Her favorite stories are Peter Pan, The Outsiders, & Our Town. You can find her on Twitter @oosterheerte.

Every great story has a beginning, middle, and end, not necessarily in that order.

We are all great stories…Phil Kaye

As the first days of June open like flowers, I’m thinking about the courage, complexity, and vulnerability of the eighth graders I taught this year…and all that I learned as we wrote together, and spent time on stage.

My students suffered. They experienced everything from abuse, to the death of a parent and coach, to Stage IV cancer. It was heartrending. And it was glorious, because they used tragedy to craft some of the most beautiful, honest writing I’ve ever read from middle school students, and their wounds gave them authenticity on stage, as many of them joined my theatre troupe.

What were our favorite mentor texts? 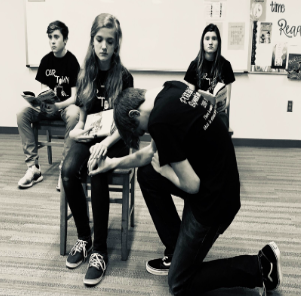 In  writing workshop, my students’ favorite things to compose were Spoken Word poetry and film analysis. When I asked students what their favorite mentor text was at the end of the year, most of them chose “Tony Steinberg: Brave Seventh Grade Viking Warrior” by Taylor Mali.

In a poem that Mali says took him three years to write, he recounts what it was like to lose a seventh grade student to cancer, and also incorporates some of his best teaching memories.

Mali masterfully employs the metaphor of the Viking ship,  their belief in Valhalla, and the importance of dying valiantly in battle.

Students selected a captivating line or  image from the poem, and wrote from that. Not surprisingly, in a year when cancer was impacting so many of my students’ families, this poem resonated with them.

Following is an excerpt from a co-authored poem written by Trevan and Hayden, after listening to and writing beside the “Tony Steinberg” mentor text:

Cancer has stolen our coach’s joy,

and torn the heart of his son like a gift ripped away from a child.

A disease caused by an uncontrolled division of abnormal cells in a part of the body sometimes causing death.

Cancer can be battled, beaten like a knight in shining armor overcoming an army.

We watched it advance… 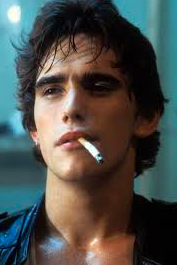 In addition to being inspired by Spoken Word poets, particularly Taylor Mali and Phil Kaye, my students enjoyed the autonomy of writing about memorable characters when we studied book and  film analysis. Our favorite mentor text for character study was “Katniss Everdeen is my Hero” by Sabaa Tahir, published in the New York Times.

In using this mentor text, students had the opportunity to borrow many excellent craft moves, such as the way that Tahir opened her commentary by explaining how she first “met” Katniss Everdeen.

Writing in front of my students, I imitated this craft move by sharing my first encounter with Dallas Winston, the toughest member of Pony’s gang, in S.E. Hinton’s The Outsiders.

Countless colleagues had urged me to read The Outsiders, yet for some reason the book and I had never crossed paths. At the time, I wondered how a story written so many years ago could still resonate with teenagers. Days away from the birth of my first child, I decided to embrace stillness long enough to give the gold-dusted pages a try, reasoning that my advanced pregnancy made everything other than reading–from tying my shoes to my habit of  swimming a mile every morning–a challenge.

Resting beneath the branches of an ancient pine tree in my front yard, with only a few persistent sparrows for company, I read the book in one afternoon, ignoring everything but the words on the pages as the characters’ lives entranced me as deeply as any magic spell.

Of all the characters in Pony’s gang, it was Dallas Winston who hooked me from his first appearance. Dallas is a character of contradictions, claiming a stone cold heart,  yet lending his gun to two desperate boys and helping to shelter them in Windrixville. Scorning love, but ultimately dying for it. Dallas’ character stayed with me long after I read Pony’s last words about him. I wondered about the tough but broken hearted boy who died under a streetlight with an unloaded gun and Two Bit’s jet handled switchblade.. To some, he died a nameless hoodlum, but Pony knew the truth.  Dallas died young, reckless, and gallant, a true gentleman in a blood soaked jacket who got what he wanted.

So I could write much more about the  eighth grade heroes I taught this year. Like Dallas, they are gallant. They have broken hearts that are healing as they leave eighth grade and look forward to their high school chapters. They’ve reminded me that one is never too young to harness the healing power of the written word.

Elizabeth Oosterheert is a middle school language arts teacher and theatre troupe director at Pella Christian Grade School in Pella, Iowa. She loves writing, and sharing the stage with seventh and eighth graders. Her favorite stories are Peter Pan, The Outsiders, & Our Town. You can find her on Twitter @oosterheerte.