Doing More with Essential Questions: Where and How Do I Belong?

But this was about doing more. This was about students answering the question for
themselves; students lending their unique voices as “texts.” I was going to need to look at this from another angle.

My AP Language and Composition students recently finished a unit on community. They 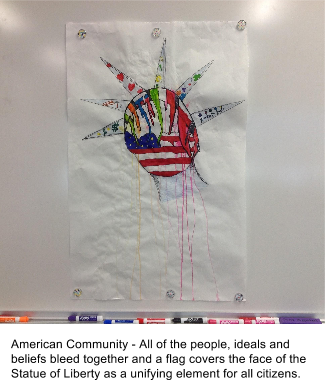 worked in and around the essential question, “What is the relationship of the individual to the community?” Through the study of a variety of essays, including everything from Henry David Thoreau’s “Where I Lived and What I Lived For,” to Scott Brown’s “Facebook Friendonomics,”  to student selected current event articles, I watched my scholars analyze text to connect author’s purpose with rhetorical strategies. However, beyond that, I was blessed to be able to witness a conceptual development in these classes too.

Students seemed genuinely surprised when they considered just how many communities they are a part of: geographical, family, faith, school, sports, friend, experiential. But when they started to consider their roles within those communities and words like responsibility, conformity, and balance began to dominate class discussion, I knew they were really on to something.

Students spoke of the dangers of conformity alongside the necessity for it. They explored the freedom found in chosen communities and the often unwelcome responsibilities to those communities we fall into by default. I saw them wrestle with the concept that communities rise and fall based on the actions and inactions of their members, and then saw evidence in more than one journal entry of the very real concern students have for their own part in that equation.

As these kids get ready to head off to a world beyond the insulated suburban existence most of them have known all their lives, they know many of their foundational communities will be changing. For some, this change can’t come soon enough. For others, I think it will be a rude awakening. And still others, a chance to move toward the authentic selves that they so desperately need to discover.

To bring this unit to a close, I wanted to harness all the unique inquiry that we had experienced. To do so, I borrowed from my American Literature class. Throughout this year, my sophomores have started each unit by doing a bit of research on literary movements in American Literature (somewhat of a snoozefest to many). I wanted them to have some contextual understanding of the mentor pieces we would study, and so they gathered information on historical events responsible for the movement, major themes of works at the time, elements of style popular during the period, connections to music and art, and famous authors working within that movement.

Students gathered and compared their research findings in small groups and then were charged with symbolically representing their research on poster sized paper. For the imaginative qualities of Romanticism, we saw Sponge Bob. The Transcendentalist faces of Emerson and Thoreau became flowers in a pot, watered by Walt Whitman. Mark Twain held up a mirror to a map of the American South. In 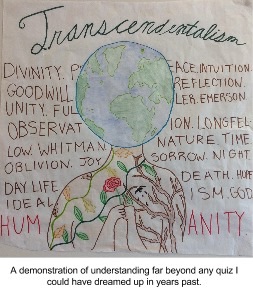 short, students captured the movements and we hung up the evidence to remind us of the context of what we were exploring.

And so, for my AP Language students, I chose to end their unit on community by bringing
them together in small groups as well, to choose a specific community and illustrate an answer to the unit essential question. I figured if they answered the question without a specific community in mind, we’d get a lot of generic posters with people holding hands around the world – thank you, Google.

Instead, they had to choose specific communities to show their understanding of the complexity of the essential question and then supply textual evidence from the mentor texts we explored in order to support those symbolic meanings.

Students shared some phenomenal work and I was impressed not only with the depth of their thinking, but the synthesis of texts this activity produced. And, because my own artistic development was apparently arrested in the second grade, it was such fun to see some of my visually gifted kids shine through the use of a new medium.

Zoey and Alyssa, who created the Statue of Liberty visual said the exercise allowed them to express their “artistic qualities – which is many times put on the back burner in AP courses.”

Creative expression of understanding put on the back burner? Shame on us.

And I know for a fact that AP classes aren’t the only place to suffer a similar fate. If we are going to do more with essential questions, we need to not only have students to be directly involved in answering them, but also give our kids more voice in the demonstration of their learning.

Ultimately, it was an assessment that combined creativity, common core standards, direct connection to the unit essential question, analysis, entertainment, synthesis, and genuine student enthusiasm. Not bad for mid-February in the frozen North.

How do you use essential questions to effectively deepen critical thinking? Please share your comments.

TTT welcomes Lisa Dennis, inspiring teacher and innovative leader at Franklin H.S. in Franklin, WI, as a visiting contributor on this blog.

After almost twenty years of teaching, I’m starting to think I might be getting the hang of it. I’ve used essential questions over the past few years, but they weren’t producing the deep discussion and analysis that I’d hoped for. It wasn’t enough to use the EQ to help us approach whatever we were reading together. I needed to do more with it.

This past year, after reading “Text Dependent Questions” by Fisher and Frey, and What’s the Big Idea by Jim Burke, something clicked. Now, the EQ has driven pretty much everything in my planning –my selection of informative texts, some of the prompts for their Writer’s Notebook, even some of the vocabulary that I select. (Though I am also having a lot of success with student choice in vocabulary, thanks to a November post on 3TT!) Now, my students are leaving class and discussing the essential question and issues from our text in other classes. A colleague mentioned (complained?) last month that he had trouble starting his class, after students leaving my class were continuing our class discussion into his room.

They are struggling with real-world questions and topics and thinking about how they really want to approach them.

Here is what that looks like in my current English class:

We are reading The Kite Runner together. Our EQ has been “When is forgiveness important?” Their final assignment will be writing about their own answer to that question.

Along the way, we are reading news articles about Afghanistan, which include the idea of someone being wronged. Students respond to guiding questions (and generate their own questions) about the articles, and they struggle with those questions in their Writer’s notebooks. We’ve read about forgiveness from people betrayed by their families, by the government, and by strangers. [To find these, I used my subscriptions to the NY Times and Washington Post and searched “forgiveness” and “family”. Sadly, a wealth of resources came up…]

One really rich pair of stories I found for them to consider centers around the shootings in South Carolina in 2015. One article highlights the teenaged children of one of the victims having expressed forgiveness toward the shooter. The other is an opinion piece that says the children forgave too quickly because “the almost reflexive demand of forgiveness, especially for those dealing with death by racism, is about protecting whiteness, and America as a whole.” The author points out that there has been no rush to forgive after any of the ISIL beheadings or 9/11. Students really dug into that idea and explored it.

In their Writer’s Notebooks, students have been responding to the idea of betrayal and forgiveness in a number of ways. They chose a quote from a list and responded to it. They reread parts of the book and considered how ‘betrayal’ or ‘forgiveness’ played a role (Thank you Fisher and Frey). They used words from their vocabulary list and wrote a poem about betrayal.

While they haven’t written their final products yet, I expect the students will have differing answers to the essential question. I believe that their writing will express the wrestling match they’ve had with the ideas. Thank goodness Burke’s book helped me see how I can use more aspects of my class to help students explore a “big idea”, and give them examples and smaller pieces of writing that they can draw from in writing an answer to the essential question. I believe my students are developing the skills to wrestle with the big questions that life has thrown (and will continue to throw) at them. They will look for more than one point-of-view, consider the source, and question the message so that they can form their own opinion based on more than something they read on Facebook.

Cyndi Faircloth teaches English, Social Studies, Art, and Journalism at Paradise Creek Regional High School in Moscow, Idaho. The school is small – with only two full-time teachers – so it’s easier to say that she teaches everything that isn’t math and science. As an interdisciplinary teacher, she works to incorporate writing in all of her classes and is learning to incorporate the writing workshop into her classes. Cyndi is a National Board Certified Teacher in English Language Arts – Adolescence and Young Adulthood.