Say it Ain’t So! Poetry Can’t Help Readers with Non-fiction!

I know, I know. I write about poetry ad nausem.  Poetry has been a focus for me this year I’m constantly finding ways to fold poetry into my instruction all the time. I wrote about it here.

Don’t single me out; Amy included her own poetry thoughts in this post.

I’ve noticed that my students don’t connect their emotions to non-fiction pieces as well as they do with poetry.  That’s unfortunate because real world issues should elicit an emotional response…but in most cases they just don’t.  I think its important, in literacy instruction, that we try to bridge that gap.

Recently, I found an opportunity to integrate a little poetry with some non-fiction.

One of several non-fiction pieces that I brought into the classroom was this one from the New York Times written by Carl Wilson. The piece talks about Rupi Kaur and her popularity compared to those who published poetry before the avalanche of social media.

Our focus was not only to look at these non-fiction pieces in order to see the moves that authors make, but also read with the thought that we could respond to the articles in the form of a Letter to the Editor.

I chose this response format because I saw that it might facilitate and opportunity for us to talk about citations, embedding quotes, and responding to nonfiction in a way that might appeal to my students.  Not only did the student struggle to connect to the pieces, they struggled to keep their eyes open the first time they read through.

Not coincidentally, the poem of the day was by Rupi Kaur herself.  It was about how when we let go of someone to whom we are connected, it can be cathartic. At least thats what it means to me. 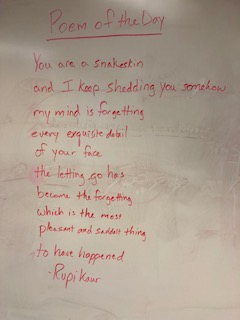 (I know its hard to read, but I hand write the poem on the board every day.)

I invited the students to respond to the poem in one of two ways: either by using the poem as a mentor text that could engage their poetic thoughts and help them write a poem of their own, or by responding to the poem about how it makes them feel or think.

We group talked our emotional reactions and shared how so many of us could relate to the poem.  Most of us connected with it in some way, but we discovered that those connection vary widely from person to person.

The next day, we came back, read the articles, began our letters to the editor, and completely failed to connect with the pieces on an emotional level.

There had to be a way to show them that we can have an emotional response to non-fiction. So, in a move stolen directly from Kelly Gallagher, I wrote a model Letter to the Editor in which I roasted the author and his article for being wrong-headed and totally missing the point of Rupi’s poetry.  The students perked up as we went through my example noticing elements like formatting, structure, embedded quotes and properly cited sources. Most importantly, they saw how I was able to show an emotional engagement with another author’s non-fiction piece.

We brainstormed some reasons that they struggled to make the same connections to non-fiction and talked about how they can have the same kind of emotional reaction across genres.

By the time we ended our discussion, they blasted off on the trajectory of writing their own letters to the editor, providing blistering commentary or thankful praise to writers they’d never even heard of before.

The writing I read was authentic, heartfelt, and emotional.  Something about weaving the poem and the article about the author of the poem allowed them to carry that connection to other pieces and release their feelings in a way that showed a real connection to something they otherwise would not have paid a second glance.

What I was reminded of once again, was that this isn’t about non-fiction texts or thoughtful poems.  It was about the students embracing their potential as writers and having the confidence to express their voice. This is a lesson that I’m sure I’ll have to learn over and over, but I won’t stop treating students as writers, even when they don’t believe that they are.

Charles Moore fell in love with Sing, Unburied, Sing by Jesmyn Ward and no one has seen him since.  Rumors persist of sightings out in Phoenix and even San Francisco. Please visit his hourly musings @ctcoach or visit his instagram account @mooreliteracy1.